Welcome to the Seattle Families of Multiples Board!

Seattle Families of Multiples (SFOM) incorporated as an independent nonprofit [501(c)(3)] organization in 2013 (previous operated as part of the Northwest Association of Mothers of Twins Club, NWAMOTC). SFOM is operated by and for its members, with a leadership team comprised of member volunteers, including elected officers.

This page provides a general introduction into the SFOM Board operations, roles and responsibilities.

Build community and provide resources for families of multiples in the Greater Seattle Area.

The SFOM Board of Directors is responsible for Club leadership, strategic planning, decision making, stewardship*, and member engagement, in alignment with the Club Mission and legal, financial and contractual obligations. According to the Club By-laws (saved in the Seattle Families of Multiples Google Drive), the Board of Directors (also referred to as the Executive Board or Club Officers) is comprised of four elected positions (which may be shared between up to 6 people in co- roles):  President, Vice President, Secretary and Treasurer.

These four positions oversee and act as executive sponsors for broad areas of Club operations (see chart below). The Directors are encouraged to actively seek participation and advisement from key stakeholders and subject matter experts (e.g. board members at-large, committee chairs, program coordinators, volunteers, and the general membership).

*Stewardship is “the responsible overseeing and protection of something considered worth caring for and preserving”. 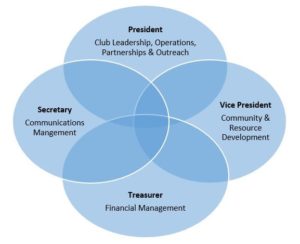 Resources for current SFOM Board Members